Karim Khan Afridi Welfare Foundation (KKAWF) was launched in June, 2015 in Islamabad after Mrs. Cristina Von Sperling Afridi and Ambassador (Retd.) Tariq Khan Afridi lost their son, Karim aged 19, in 2014, and it became their inspiration and a motivational force to engage and facilitate the youth in protecting their lives that are vulnerable to the dangers of drug abuse.

The adverse effects of drugs are mostly seen in teenagers, as they are not aware of what it could cost them, to try to experience something they have never done before. Almost 66% of population of Pakistan is below the age of 25, and therefore they are passing through the phase of exploring new things and experiences that attracts them, and this is where they need guidance. Reports show that Pakistan has around 8.9 million people who use some form of drug. This is quite alarming for the children to be exposed to such a menace and it is time that we should guide our school going teenagers on the dangers of indulging in the use of recreational drugs through mediums other than the textbooks.

Since there are many physical and psychological changes happening simultaneously at puberty, KKAWF has developed a model with five main guiding spheres of interest. 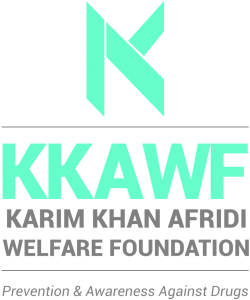